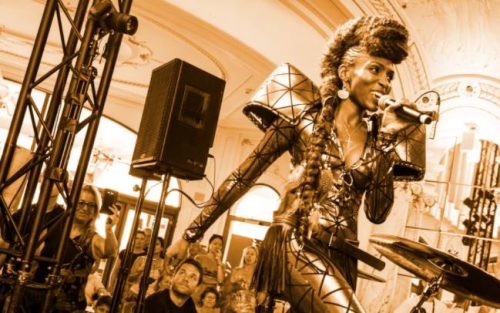 Directed by British filmmaker Oliver Murray, the documentary retraces the incredible story of Claude Nobs and his now legendary event, the Montreux Jazz Festival. The three episodes will have their world premiere on 20 March 2022 at 8.45pm on RTS 2, after which it will be made available online at PlaySuisse and distributed abroad.

Three one-hour episodes, more than 40 testimonies, 30 concert performances and a variety of previously unseen images: never before has a documentary of this magnitude been made on the history of Claude Nobs and the Montreux Jazz Festival. By immersing the audience in the Festival’s exceptional archives, They all came out to Montreux offers a breath-taking panorama of half a century of music history. In total, more than thirty concert excerpts, from the 1960s to the present day, are included in the documentary.

Although the artists occupy a prominent place in the series, the main protagonist of this incredible story is obviously Claude Nobs, nicknamed Funky Claude by Deep Purple. We discover how he managed to transform a small Swiss town into an unmissable live music event, out of love for his region and for jazz. The documentary tells the story of Claude’s journey from his childhood and the challenges he had to face in a society often hostile to his projects and his personality, considered too different at the time. Narrated by a host of artists, relatives and sometimes by Claude himself, the series paints a portrait of an extraordinary and visionary character.

They all came out to Montreux is the third documentary by British director Oliver Murray, who has previously made films about Ronnie Scott, founder of the famous London jazz club, and Bill Wyman, bassist of the Rolling Stones. It was while working with Wyman that Oliver Murray first heard the name Montreux:

“Rolling Stones bassist Bill Wyman told me that the greatest moment of his career was playing the Montreux Jazz Festival with his heroes Muddy Waters and Buddy Guy. That’s how I discovered the amazing extent of the Montreux audiovisual archives.”

Oliver Murray
Oliver Murray and the production teams faced a major challenge in making this series during the covid crisis: interviews with artists and relatives of Claude Nobs were conducted remotely around the world, while production was managed between Switzerland, London, Paris and Sydney.