The Seychelles history as an inhabited land is rather short—French spice planters, together with their slaves, began settling in 1770, though there’s a firm local belief that Arab traders used the islands centuries before the French laid ownership in 1756.

Arab navigators and other sailors doubtless knew of Seychelles for many centuries. However, the recorded history of Seychelles dates back to the fourth of the Portuguese India Armadas led by Vasco da Gama. On 15 March 1503, the scrivener Thomé Lopes noted the sighting of an elevated island, doubtless one the granitic islands and almost certainly Silhouette Island.

The first recorded landing was by the men of the English East India Company ship Ascension, which arrived in Seychelles in January 1609. The islands were claimed by France in 1756. Seychelles remained uninhabited until the first settlers arrived on board the ship Thélemaque, which arrived on 27 August 1770. Captain Leblanc Lecore landed the first colonists, comprising 15 white men, eight Africans and five Indians.

The Seychellois Creole language developed as a means of communication between the different races. The British frigate Orpheus commanded by Captain Henry Newcome arrived at Mahé on 16 May 1794. Terms of capitulation were drawn up and the next day Seychelles was surrendered to Britain. Following the fall of Mauritius to British forces, Captain Phillip Beaver of the Nisus arrived at Mahé on 23 April 1811 and took possession of Seychelles as a permanent colony of Britain.

After the Napoleonic Wars of the early 19th century, the Seychelles became part of the British Empire, first as a colony administered as a dependency of Mauritius then, in 1903, as a separate Crown Colony. The Seychelles became an independent republic in 1976.

Following independence, the country became an unlikely player in the Cold War. In 1977, the jet-setting, capitalist president was ousted by a socialist named Albert Rene, who became a client of more powerful Communist regimes. After rejecting a tourist-based economy for many years, he came to embrace it. In April 2004, Rene finally turned over power to his former vice president, James Alix Michel, but continued as head of the ruling Seychelles People’s Progressive Front.

In December 2004, three of the country’s islands were hit with tidal waves that were part of the tsunamis that struck Southeast Asia. There was widespread property damage in the capital, Victoria, and on the island of Mahe. 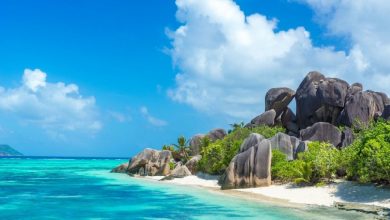