Praslin Island is located 44 km (27 miles) North East of Mahé. It is the second largest island in the Seychelles, after Mahe, and was often used historically as a hideaway for pirates and Arab merchants. As well as the pristine and beautiful beaches Praslin also boasts large tracts of tropical forest, with birds such as the endemis Seychelles bulbul and Seychelles black parrot. The Vallee de Mai Nature Preserve is known for the unique coco de mer and vanilla orchids. Praslin is surrounded by Curieuse Island, La Digue, Cousin Island and Aride Island.

The main attraction on Praslin is the Vallée de Mai, a UNESCO World Heritage Site that’s home to the endemic “coco de mer” palms that produce the world’s largest nuts, they can weigh as much as 40 lb/18 kg. The nuts got their name, meaning sea coconut, hundreds of years ago when they washed up on the shores of Africa and Asia. When its outer shell is removed, the nut looks amazingly like a woman’s pelvis, both fore and aft, which explains the nut’s status as a collector’s item. (The “male” part of the tree looks appropriately male).

Praslin is also home to some of the world’s rarest birds, such as the black parrot, fruit pigeon and Seychelles bulbul. Take the self-guided walking trail to tour the Vallee de Mai (in the south-central part of the island), allowing at least two hours for the stroll (it can take a full half-day if you walk every trail).

The island’s best beach, exquisite Anse Lazio, is picture-perfect—worth the hilly walk to reach it. Cruise ships can dock at Praslin but so far have not managed to spoil the island’s tranquil charm. There is a casino in Côte d’Or, however. Although there’s a good selection of small hotels, guesthouses and self-catering apartments on Praslin, luxury
hotels have opened, including one built around an 18-hole Marc Farry golf course.

The airport at Amitié has been rebuilt in Creole style with palms, sculptures and water features. A fast catamaran service keeps the journey time from Mahe to approximately one hour. A regular schooner service plies to La Digue.
The people on Praslin are exceptionally friendly, and the slow pace of life is very appealing. We suggest a stay of at least three nights. 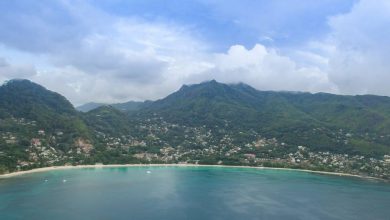