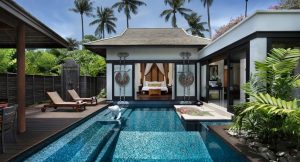 French-born Gauderic is promoted to his first General Manager role from the position of Resort Manager.

He joined the company in September 2016 as Resident Manager of Anantara Dhigu, Anantara Veli and Naladhu Private Island in the Maldives and during his two-year tenure also acted as General Manager overseeing the resorts’ operations.

To book your luxury hotel, resort and spa in Krabi and worldwide, click here

Prior to joining Anantara, Gauderic spent over a decade in hospitality management in France working at Plaza Athénée Paris, Hilton Paris Tour Eiffel and Accor Pullman Paris Tour Eiffel. In 2013 he relocated to Thailand to join Swissôtel Resort Phuket, before taking up the Director of Operations role at Fairmont Le Manoir Richelieu, La Malbaie, Québec in Canada.

In-between ensuring once-in-a-lifetime experiences for his guests at Anantara Golden Triangle and playing an active role in helping elephants that cannot help themselves at the world-renowned elephant camp, Gauderic can be found practicing his Muay Thai boxing skills or finding vintage cars and motorcycles.

The former Commissioned Lieutenant in the Swedish Army reserves who served as a Battalion Quartermaster has three decades of luxury hospitality experience under his belt, having worked with prestigious hotel brands and cruise ships around the globe.

His career changed course when he joined Celebrity Cruises as Hotel Director, sailing across Asia, Alaska, Caribbean, Baltic, and the Mediterranean. In 2015 he returned to shore as General Manager of W Koh Samui, Thailand, from where he joins Anantara Hotels, Resorts & Spas.

Daniel graduated from the University of Houston – Conrad N. Hilton College with a Bachelor’s degree in Hotel and Restaurant Management in 2002.

Swiss-Belgian national Serge is no stranger to Asia’s City of Angels, having previously worked in food and beverage management roles at Mandarin Oriental Bangkok and COMO Metropolitan Bangkok.

Serge brings with him over twenty years of experience in international five-star luxury hotels across Europe, Southeast Asia, and the Middle East. Prior to joining Anantara, he was the Hotel Manager of Hilton Singapore and held various Director of Operations roles at Hilton London, Conrad Dubai, and Armani Hotel Dubai.

Serge holds a Diploma in Hospitality and Catering Management from the Hotel Management School in Lausanne (EHL), Switzerland.

About Anantara Hotels and Resorts
Anantara is a luxury hospitality brand for modern travelers, connecting them to genuine places, people and stories through personal experiences, and providing heartfelt hospitality in the world’s most exciting destinations. The collection of distinct, thoughtfully designed luxury hotels and resorts provides a window through which to journey into invigorating new territory, curating personal travel experiences.

From cosmopolitan cities to desert sands to lush islands, Anantara connects travelers to the indigenous, grounds them in authentic luxury, and hosts them with passionate expertise. The portfolio currently boasts over 35 stunning hotel and properties located in Thailand, the Maldives, Indonesia, Vietnam, China, Cambodia, Sri Lanka, Mozambique, Zambia, the UAE, Qatar, Oman and Portugal, with a pipeline of future properties across Asia, the Indian Ocean, Middle East, Africa and South America.

Andrew Wood Back at the Helm of Skal Bangkok President