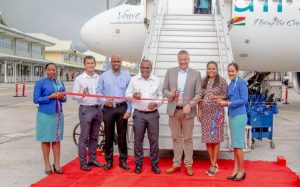 Victoria, Mahé (Seychelles) – December 9, 2019 (travelindex.com) – After a two year legal battle we received a win in case against Government of Seychelles regarding sudden UNWTO endorsement withdrawal after lengthy legal battle.

The court case was filed against the Government two years ago, following the abrupt revocation of my candidacy for the post of Secretary-General of the UNWTO by President Danny Faure just 36 hours prior to the elections and this after having campaigned tirelessly for the post, incurring huge financial losses in the process and widely tipped to win the election.

The decision to withdraw the Seychelles candidature was taken by the Government of Seychelles following pointed reminders by the African Union of their obligation to support the Zimbabwean candidate. The reminders comprised threats of possible economic sanctions against Seychelles if it did not revoke my nomination. The revocation was done despite the threats of sanction being known by the Government prior to and at the time of endorsement of my candidature, and even despite them being described as risks worth taking.

The Court ruled in my favour, after a six-month wait for the judgment.

The Government raised many defences and excuses as to why they should not be held liable to an ordinary citizen, including act of state and national interest.

Despite acknowledging my campaign efforts as rigorous and tireless, and that the Government had committed a fault in law and were liable to repair the same, the Court rejected most of my claims for compensation for moral and material damage under the various heads. I was awarded a small sum, which just about covered the costs of filing the case to begin with, and denied costs.

Upon advice of his legal team, I shall be appealing the Judgment on quantum, given that the sum awarded is a poor reflection of the monetary expenses incurred during my campaign, and the moral damage endured following the sudden revocation of my candidature at the last possible moment.

Congratulations to Donald Payen of Air Mauritius for pulling the International Award for “Outstanding Contribution to the Aviation Industry”. The World of Tourism and of aviation all know the passion with which Donald Payen has been showing in his work at Air Mauritius. He remains a man with a heart for the region and its Vanilla Islands.

Congratulations to Terry Carola and his Team for another successful International Fashion Week. Feedback has been positive with Fashion Designers coming from many countries working side by side with Seychellois Fashion professionals.

A series of activities was also organised to commemorate this year’s Seychelles Ocean Festival (SOF) by the Seychelles Tourism Board (STB) and its various partners.

The event, which promotes marine-based tourism in the island archipelago was held from Friday November 22, 2019 to Sunday November 24, 2019 and was celebrated through a plethora of education and fun activities throughout the weekend.

In line with the STB marketing strategy, which includes promoting Seychelles as one of pioneers of conservation in the region, the SOF is a prime event for the destination as it provides a platform STB to sensitize the local population about the role and importance of the marine world for Seychelles as a destination.

Azzedine Bouali, President of the Réunion Tourism Federation was leading a delegation for a two day working visit to Seychelles last weekend accompanied by Pascal Viroleau, the CEO of the Vanilla Islands to meet with Minister Didier Dogley, the Minister for Tourism, Civil Aviation, Ports & Marine.

Alongside Mr Bouali were Gerard Argien the Director of the Reunion Tourism Federation and Emmanuelle Lorion who is the one responsible for Cooperation at the Federation.

In Seychelles they took time to meet Alain St.Ange, Head of Saint Ange Consultancy to discuss possible cooperation for the future as and when the Vanilla Islands and the Reunion Tourism Federation will embark on sensitization strategies for the six member islands of the regional organisation.

The Vanilla Islands has been successfully developing the cruise tourism sector in the Indian Ocean seeing growth from 14,000 passengers in 2014 to almost 50,000 cruise visitors in 2018.

The Indian Ocean body realises that for this success story to become sustainable over time, the cruise ship passenger increase must be accompanied by an optimal quality of service at each port, whatever the island and working with Tourism Ministers of the region to see more involvement of the islanders and in so doing increase spending by the disembarking passengers.

Other islands are also involved in this initiative which aims to get the Indian Ocean recognised for the quality of its ports as well as the beauty of its landscapes.

Didier Dogley, Minister of Tourism, Civil Aviation, Ports & Marine and President of the Vanilla Islands stated when signing the protocol: “This partnership ensures that all the islands offer the same level of service quality for cruise liners and their passengers. Cruise operators expect high-level services and we’re demonstrating that we have taken the future into our own hands.”

“We work in collaboration with tourism institutions from each island to support them in implementing a process that reassures companies. Réunion has been working on the operational management of docking cruise ships in collaboration with all concerned parties” states Azzedine Bouali, President of the Réunion Tourism Federation.

Air Seychelles, the national airline of the Republic of Seychelles has today welcomed its first non-stop flight from Tel Aviv, linking Israel to the Seychelles.

Flight HM021 which landed at the Seychelles International Airport at 8.15am was greeted by a traditional water canon salute, in the presence of key dignitaries, government representatives, travel trade members as well as media partners.

To celebrate this momentous occasion the Minister of Tourism, Civil Aviation, Ports and Marine, Didier Dogley, Chairman of Air Seychelles Board, Jean Weeling-Lee, Air Seychelles Chief Executive, Remco Althuis together with the Chief Executive of Seychelles Civil Aviation Authority (SCAA), Garry Albert and Seychelles Tourism Board (STB) Chief Executive Sherin Francis participated in a ribbon-cutting ceremony to mark the commencement of the new service. Addressing the guests during the welcoming ceremony, Minister of Tourism, Civil Aviation, Ports and Marine, Didier Dogley said: “The launch of the new service between Seychelles and Tel Aviv will further enhance the tourism and economic ties between the two countries, in addition to making a significant contribution towards the growth of tourism in the Seychelles which has been targeted between 3 to 5 per cent for 2019.

“As part of our marketing efforts to bring the Seychelles Islands to the world, we will continue to work with Air Seychelles to build our presence within the Israeli market, to further increase our visibility and establish Seychelles as the preferred holiday destination in the Indian Ocean.” Remco Althuis, Chief Executive Officer of Air Seychelles added further: “We are tremendously excited to have added Tel Aviv unto our network and delighted to welcome the first guests on our new scheduled non-stop flight from Tel Aviv to Seychelles today.

“Being on board this first flight which was 100 per cent full with 120 passengers, the maximum capacity for this route, I must say that since we made the announcement to fly on the Tel Aviv route, the feedback from the Israeli market has been very positive.

“The extremely strong bookings, exceeding the 90 per cent load factor for the upcoming two months has definitely surpassed our expectations, and we are confident that with the support of our partners both locally and abroad, we will continue to bring more visitors from Israel to the Seychelles.

“The successful arrival of flight HM021 would have not been possible without the support of our stakeholders and colleagues at Air Seychelles. I would like to take the opportunity to thank all those who has been heavily involved in this project including the STB, SCAA, Department of Foreign Affairs,travel trade partners as well as our dedicated staff members for the effort and invaluable support throughout.”

The flight between Tel Aviv and the Seychelles operated on Wednesdays has been carefully timed to provide business and leisure traveller’s seamless onward connections to Mauritius and Johannesburg.

British Airways Back to the Seychelles in March 2018

Alain St.Ange Participating on Think Tank on Tourism in Switzerland