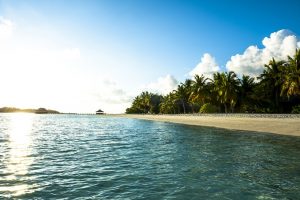 Victoria, Mahe (Seychelles) – October 15, 2018 (travelindex.com) – Last week, we touched on the need to ensure that Seychelles keeps its economy well oiled. This question brought in many reactions, and everyone agrees that Seychelles needs to further consolidate its tourism industry. Too many hard working Seychellois are dependent on a buoyant tourism industry. Visibility is key today, and visibility will remain key for Seychelles to be relevant as a tourism destination. The World Travel Awards Ceremony held in Durban South Africa, has just ended and this coincided with CONDE NAST publishing its Readers Choice Awards. The importance of both these listings are known by the Tourism & Travel World, and the performance by tourism destinations is often related to being seen or remaining a best kept secret.

Seychelles and other islands of the Indian Ocean Vanilla Islands Group know they need to have a major event that will act as the catalyst for press visits to help increase visibility and in so doing, remain relevant. Press cannot come back to write about lovely beaches, as they have all done so by now. Tourism remains the golden goose for Seychelles and everything must be done to ensure it stops losing all of its feathers and down. Every tourism industry player is important for the country, and they must be respected for being part of the industry that remains the backbone for the island’s economy. ‘Clipping the wings’ of the industry, as transpired in answers by Tourism Minister Didier Dogley to the question session at the National Assembly, may rub many on the wrong side, and repercussions may well be a slowing down of the island’s economy that remains so dependent of tourism.

Before looking at the World Travel Awards, and the positioning of the Indian Ocean Vanilla Islands in the Conde Nast Readers Choice Awards, let us look at the performance of our regional islands in official visitor arrival statistics for the period ending October 2018. Where each island stands in their approach for visibility in key tourism source markets and in the world of tourism, is known to every tourism entrepreneur, as it is known to each and every potential holiday maker.

The award ceremony for the 2018 Travel Oscars took place recently in Durban / South Africa. During the ceremony, the African mainland winners were announced, as well as the winners of the Indian Ocean region.

Close rival Air Seychelles, a multiple winner in the past, this year only walked away with one trophy for Leading Airline – Economy Class

In the respective national ‘league’, Mauritius came second with a total of 13 awards, behind the Maldives, which carried home an additional 16 trophies.

The Seychelles took 9 national trophies home, followed by Madagascar with three and Reunion Island with two trophies. Mauritius’ Tourism was also named as the region’s Leading Tourism Board.

Condé Nast Traveller readers ranked the 30 best islands in the world outside the U.S. in the 2018 Readers’ Choice Awards survey, from far-flung stunners in Southeast Asia to volcanic outcrops in the Mediterranean. This year, we’ve broken them out by region: the best in Asia, Australia and the South Pacific, Caribbean and the Atlantic, Europe, North America, and best in the rest of the world (phew). Don’t worry—there’s a separate list for the U.S. entirely. Did your favourite make the cut? Here’s some island inspiration for your winter vacation.

In Conde Nast Traveller Readers Award 2018 – in the Top 5 in the Rest of the World category we see Maldives coming out first followed by Mauritius, Galapagos, then Seychelles and finally Zanzibar.

Clipping the wings of the Seychelles Tourism Industry: Vertical Integration

Minister Didier Dogley, the island’s Minister responsible for Tourism, was in the National Assembly last week to answer questions on his “Amendments to the Vertical Integration policy” that is set to touch the Tourism Industry of Seychelles, and only the tourism industry players. Other very big economic players settled and commanding other sections of the island’s economy, can diversify into the tourism industry, as they continue to control their section of expertise and other lines of business, they are already well established in.

An extract of the Government daily Newspaper, Nation, revels the “Clipping of the Wings” of the tourism industry move:-

“The Baie Ste Anne Praslin elected Member, the Hon. Churchill Gill MNA quizzed Minister Dogley on the amendments made earlier in June to the Vertical Integration policy and what these changes entail.

Vertical Integration is the term used to describe a strategy wherein the supply chain of a company is owned by that same company, this means that the company operates various services or provides different products which are normally operated by separate firms.

Since this method can impact negatively on small businesses, the ministry for tourism established the Vertical Integration policy in 2008 in order to address the pleas made by small businesses in the tourism industry and to provide some form of control to avoid that large tourism service providers dominate the local market.

Minister Dogley stated that the policy was revised in June 2018 and assured the members that the revision process had included consultative sessions with all stakeholders in the tourism industry.

A total of eight major amendments were made, Minister Dogley explained.

Firstly, tour operators are only able to invest in or manage not more than 150 hotel rooms compared to previous conditions in the policy that allowed an investment of 15% of the total operational hotel rooms in the country.

“For instance there were 6171 rooms in July 2018, which would have made it possible for a tour operator to acquire 925 hotel rooms. This shows that with the increasing number of rooms, there were potentials for the tour operators to monopolise the market and this is why we opted for a fixed number,” Minister Dogley further explained.

Other amendments include motorised watersports limitations as well as limitation on hotels that can gain access to the bicycle rental business on La Digue.

The amendments also make provisions for tour operators to be able to own specialised restaurants and compete in the ferry business.

Additionally, hotels are allowed to own and manage only one excursion boat of a maximum capacity of 12 passengers under the revised policy. This is to encourage hotels to outsource this service to other small excursion firms.

In the same line, tour and hire craft operators will have to adhere to a new condition dictating that they only operate with five boats instead of 10 to allow small, independent boat operators to gain a greater foothold to the excursion market.

Operators who currently have more than five boats have been given a grace period of one year starting June 1, 2018 to do away with the excess boats.

On this point, several MNAs expressed their concerns that this would not necessarily help smaller businesses since the ministry does not cap the capacity limit for these excursion boats.

“It is difficult for us to put a limit on the size of the boats operated by tour operators because we are developing the cruise ship business in Seychelles and we need these big boats that have a large capacity in order to cater for the large number of tourists during the cruise ship seasons,” Minister Dogley replied.

Minister Dogley also stated that Seychelles is a free market and they cannot enforce policies that are too strict and that could potentially scare away investors from the tourism industry.”

This proposition, seen as “Clipping the Wings” of the Seychelles Tourism Industry, is set to see a lot of further discussions and amendments. Investors or leaders from other Trade and Industries are not touched, and they can enter the Tourism Industry and indirectly now control the industry, because of the limits set on the existing players, but not on any other trade or business lines.

Are these “Amendments to the Vertical Integration policy” barring, for instance, “Club Med” from setting up their proposed establishment at Sainte Anne because they are a Tour Operator and are already looking also into the airline industry? Or is the rule only applicable to Seychellois? A local DMC (Tour Operator) is already also involved in the island’s largest tourism establishments, will that amendment mean they have to relinquish, on paper at least, all their interests in the said establishments?

Unfortunately, there are more questions than answers for now, and is their a need to grow to tourism cake to ensure every one gets their share of the tourism industry that should be the preoccupation of the Government? Time will tell.

Nick Baldwin , the first Seychellois athlete to qualify for the Ironman World Championship in Hawaïi

Congratulations to Nick Baldwin, the first Seychellois athlete to qualify for the Ironman World Championship in Hawaii. It is important for us to also say a thankyou for his sponsors. They are the ones who keep Nick Baldwin flying the Seychelles flag as a proud Seychellois.

It is important to again today acknowledge all who are diligently re-posting the Saint Ange Tourism Report weekly. Our Report ranges far and wide, from Australia to the Americas, from the Indian Ocean Vanilla islands to Africa & Asian and Greater Europe, with your continued support, which is greatly appreciated. You are helping us to grow from strength to strength with each new Edition.

Will African Union Say Mea Culpa for Not Supporting Their Best